Tameka Davis is a Partner in the Litigation department of Conyers Dill & Pearman in the British Virgin Islands. Tameka was called to the Bar of England and Wales in 2003 and joined Conyers in 2009. After a brief stint at the International Bar Association, she joined private practice in Jamaica before moving offshore to Anguilla in 2005. She has over 11 years’ experience in offshore commercial litigation.

Tameka’s practice includes international insolvency, bringing and defending unfair prejudice, breach of contract, conspiracy and asset tracing claims, obtaining and resisting interim relief including disclosure and urgent injunctive relief, and commencing and resisting forum convenien applications. She is particularly skilled at civil procedure and the enforcement of foreign judgments and awards in the BVI. Tameka appears in the Commercial Division of the High Court of the Virgin Islands and the Court of Appeal.

Tameka has advised many notable entities including, Bacardi International Limited, JSC Kazatomprom a state-owned uranium mining enterprise in Kazakhstan and since 2009, JSC BTA Bank, a Kazakhstan Bank. The latter specifically in relation to its ongoing efforts to recover billions of dollars misappropriated from it by its former chairman Mr Mukhtar Ablyazov. Tameka has also acted in a matter concerning a state-owned aluminum processing plant in Tajikistan and owners of a luxury resort in Anguilla. Tameka has advised and acted for BVI licensed insolvency practitioners, a California Court-Appointed trustee and high net worth individuals, amongst others.

What Happens in the Meantime: Interim Measures Under the BVI Arbitration Act, 2013, BVI Finance Newsletter, September 2014 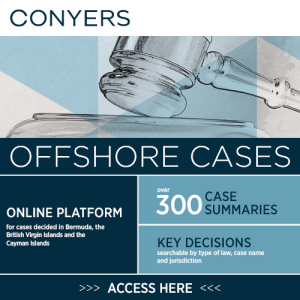