Robert Briant is a Partner and Head of the Corporate department in the British Virgin Islands office of Conyers Dill & Pearman. Robert joined Conyers in 1994 and is highly regarded for his extensive experience in all aspects of corporate and commercial law.

Robert is considered one of the most senior corporate lawyers in the BVI and focuses on mergers and acquisitions, joint venture companies and investment vehicles. He provides specialist advice to hedge funds and private equity funds, as well as advising on a broad range of financing transactions. His clients include Amazon, Diageo, Burger King, the Virgin Group, LVMH, Belmond, Denham Capital, Bank of America, Morgan Stanley, JP Morgan, Commerzbank, Bank of Asia and others.

Robert is the former Chairman of BVI Finance Limited, a public/private partnership created to develop further BVI’s financial services industry. He also sits on the Securities, Investment Business and Mutual Funds Advisory Committee and is a past member of the Joint Anti-Money Laundering and Terrorist Financing Advisory Committee of the BVI. Robert was also responsible for forming and chairs a consortium of the largest law firms in the BVI to make recommendations to Government on issues affecting financial services in the BVI. He is also regular contributor to the media on matters of BVI law.

Robert is consistently recognized in the top tier in Chambers Global, Legal 500 and IFLR1000. Robert holds a BA from McGill University, an LLB from University of Toronto and an LLM from Cambridge University. 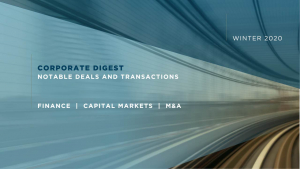